The Beetles Are Coming! 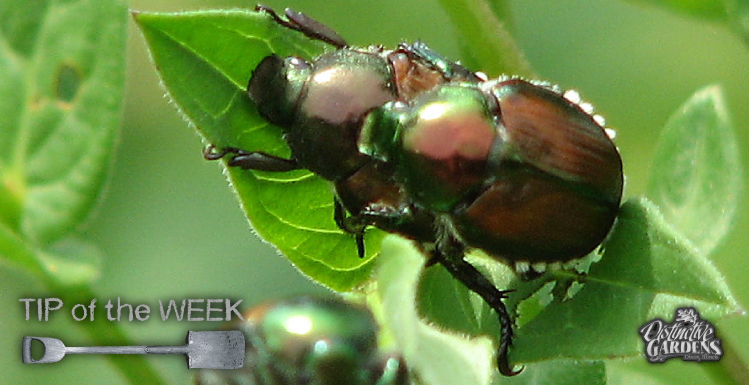 It's that time of year... again.  They are here.  Japanese beetles have to be one of the most devastating bugs in the garden.

One way to help cut down on the population of Japanese beetles is to apply Milky Spore to your yard. Milky Spore is a product that contains spores of milky disease.  Milky disease is a type of bacteria that kills the white grub of the Japanese beetle. Milky disease is not harmful to other creatures. It may be even more helpful to apply it to lawns, perennial beds, and other areas near the garden that you don't till.  This won't help the year you apply, but will the next.  It is a one-time application.

The next thing is you take a six-pack, go over to the neighbor’s house, say 'hey let's have a few beers', and put Japanese beetle traps in their yard.  I have never understood why people use those things.  If you didn't have Japanese beetles before, use those traps and you will now.

It always amazes me what plants they go to.  The Fern Leaf Buckthorn has such a narrow leaf that what's the point?  There's not much to eat.  Some people have problems on roses and some don't.  It just depends on where you are located.

You can also handpick if they are not real bad.  If you get enough and squeeze them maybe you can get a cup of beetlejuice.  (Just kidding)  It's my day for bad puns.