Peace on Earth and Big Trees 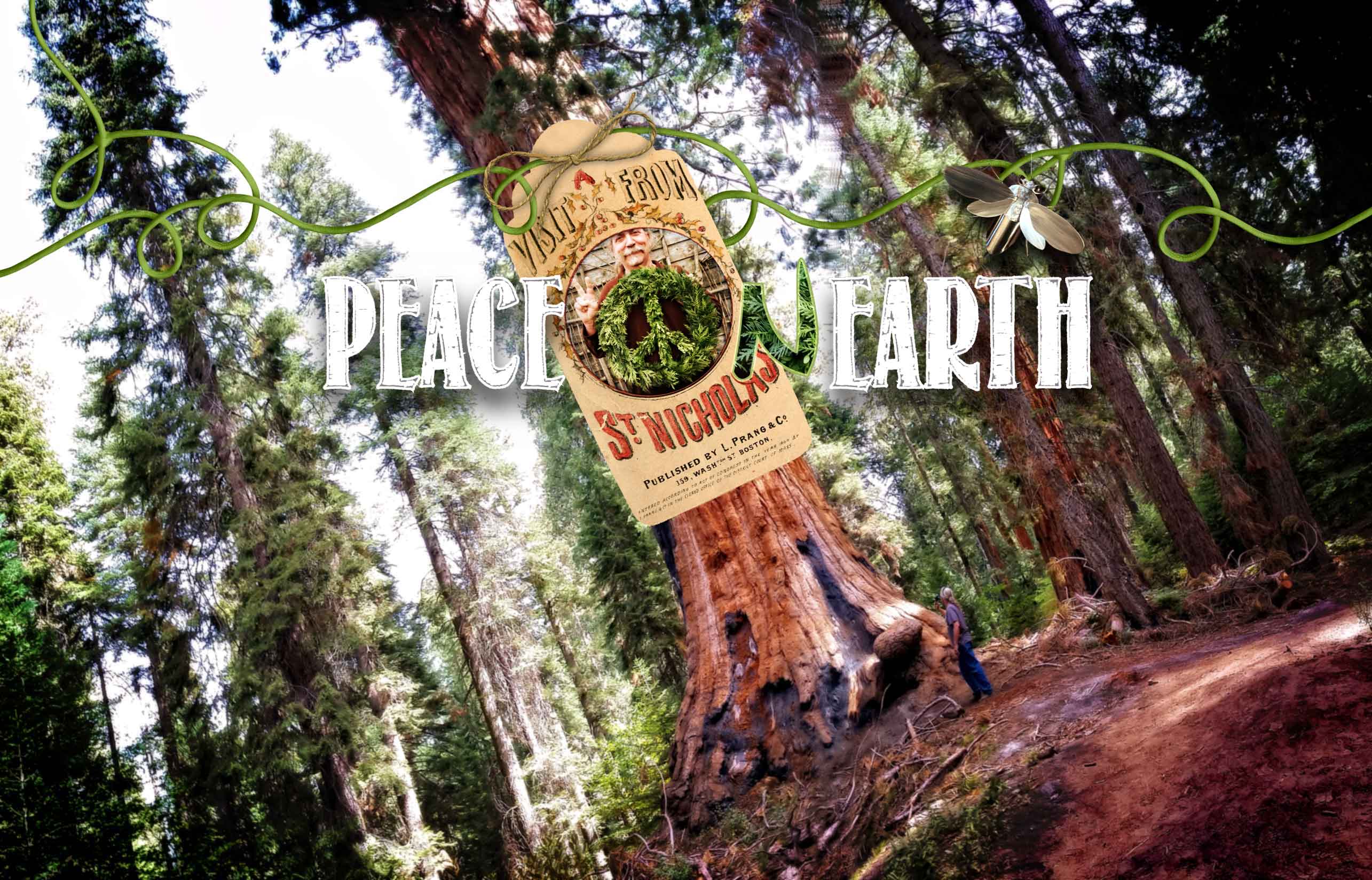 What do big trees have to do with peace?

As a kid down at the end of our road was a “big” grove of old maples we called “The Trees”. At least they seemed big to me as a child. It was in those Trees I found a certain quiet creativity when walking through them alone. I would pretend I was going on great hikes into the wilderness. There, I was not so much against the world, but in it. Surrounded in magic.

And when with others, I found the best fun in those trees. We would ride our bikes down, climb up high, build forts and have all sorts of adventures. Old branches turned into castles. Twisted trunks curved into staircases leading to tree top perches. Imagined heroes rose and fell in those long afternoons. We were adventurers in a magical land. That was until the bell rang and it was time to high tail it back for dinner. The Trees were a place for me where imagination had no limits. Playing there as a kid, I discovered all sorts of things about nature and myself. I remember those times as if they were yesterday. And the peace they created has kept me coming back for more.

Fast-forward to adulthood and trees and forests still hold that same magic. Nothing beats walking through a forest. Senses heightened soaked in quiet awareness. Even better, when it’s evergreen the aroma intoxicates. Maybe this is one of the reasons the backyard is full of them at this point. I just need them around to feel good. When working from home I often walk out onto the deck just to look at them. It helps keep stress in check. And serves as a good mental Band-Aid until its time for our yearly road trip to see more, you guessed it, trees.

Visiting a new forest is like meeting a new friend. One you feel like you’ve known for years. It’s good food for the soul. It’s a way to recharge. 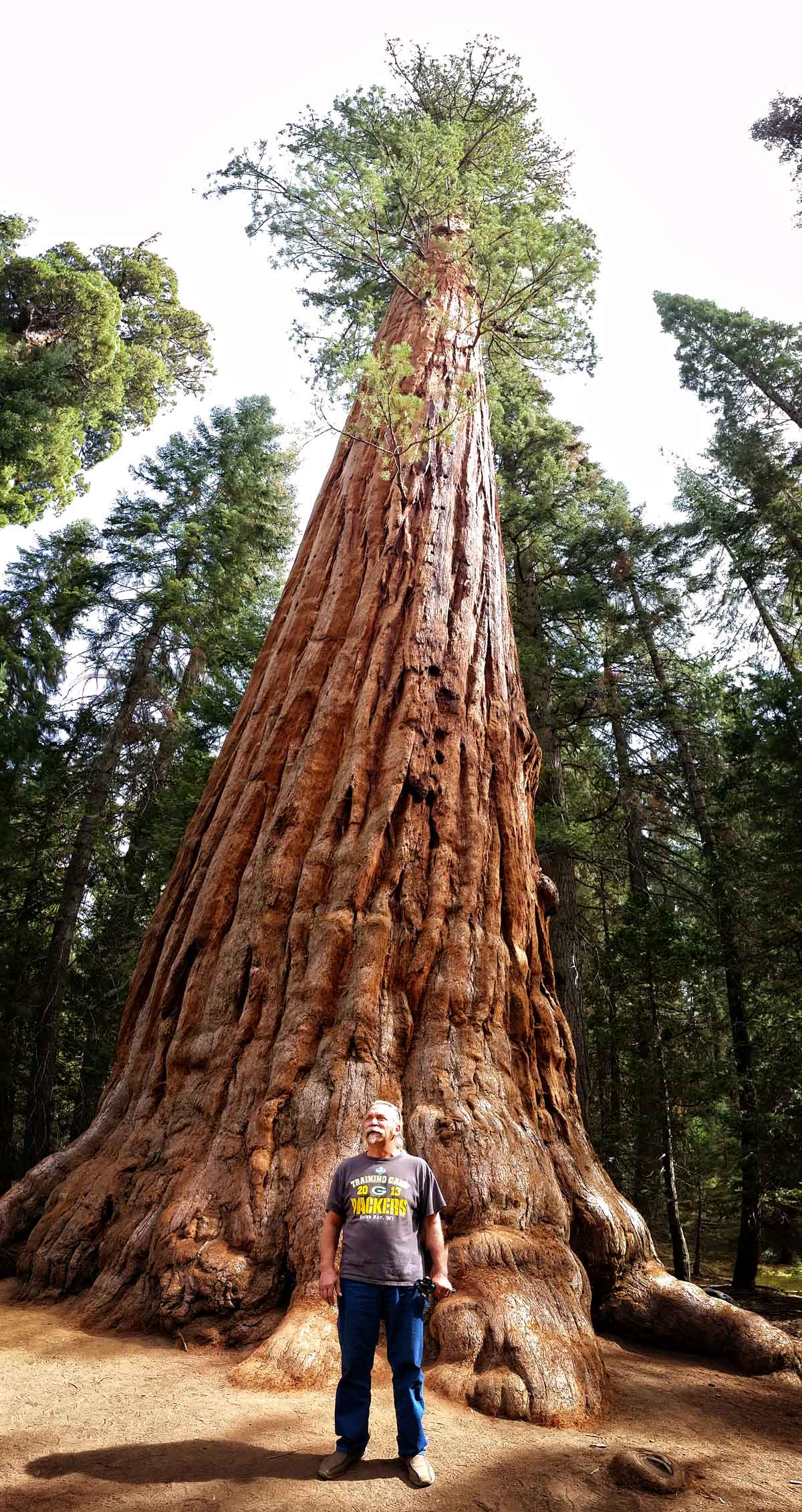 For this year’s road trip we took off and headed west to the Sierras. This was a first for both of us. On the bucket list: “Sequoia National Park”. Turns out if forests are magical then these Big Trees are king.

Driving into Sequoia, sun out, crisp fresh air coming into the van. The road winded up and up. As the elevation grew the forest changed. Bold yellows of Aspen were replaced with shades of cool green. Air temperature dropped. Cascades of longer shadows covered the road. Every once in awhile a large trunk appeared out of place. Was that it? Was that a “Big Tree”? A Sequoia?

Then it happened. As we headed through a curve a mammoth trunk appeared. Right there on the bend. The girth was that of a one-car garage. It didn’t even look real. It stood out against other quite large trees as a monster. A primordial beacon shining a light on just how small we are in both size and time. And there I was slammed right back into my childhood. And on a magical adventure once again. I just saw my first Sequoia. Even if I could have imagined a tree this large I would have been way off. The trunk alone intimidated me and made me feel so small. And at the same time called to me to come for a visit. Close up. I did not resist.

We pulled off the side of the road like a couple of garage sale junkies on a crack of dawn mission. I was so excited I forgot to close the van door. I did however grab my camera and started filming. A quick scamper up the bank and I was there. And holy lord, our big tree had neighbors.

They all cast off an aroma I’ve not experienced. The sweetness of their evergreen scent permeated everything. The one big boy’s massive trunk was covered in soft reddish bark. Signs of forest fire blackened the base. It was old and large and made me feel as if I were just born. A dinosaur could have popped out behind its brothers and would have made perfect sense.

Both of us explored this massive old soul along with his neighbors. In one, we could walk into its trunk and stand engulfed by nothing but tree. Eventually we wandered off in our own directions. I headed off around the backside. Bud inspected cones and bark and forest seedlings near the road. The trunk completely blocked my view of him. And here I was alone in the forest. That quiet creativity I experienced as a kid came right to the surface. I swung the camera out to capture the view. It was full of old growth Sequoias.

In spots dappled sun found its way to the forest floor. But mostly it was shade. Bright shade. Like the kind of shade that only happens when the canopy is tall. 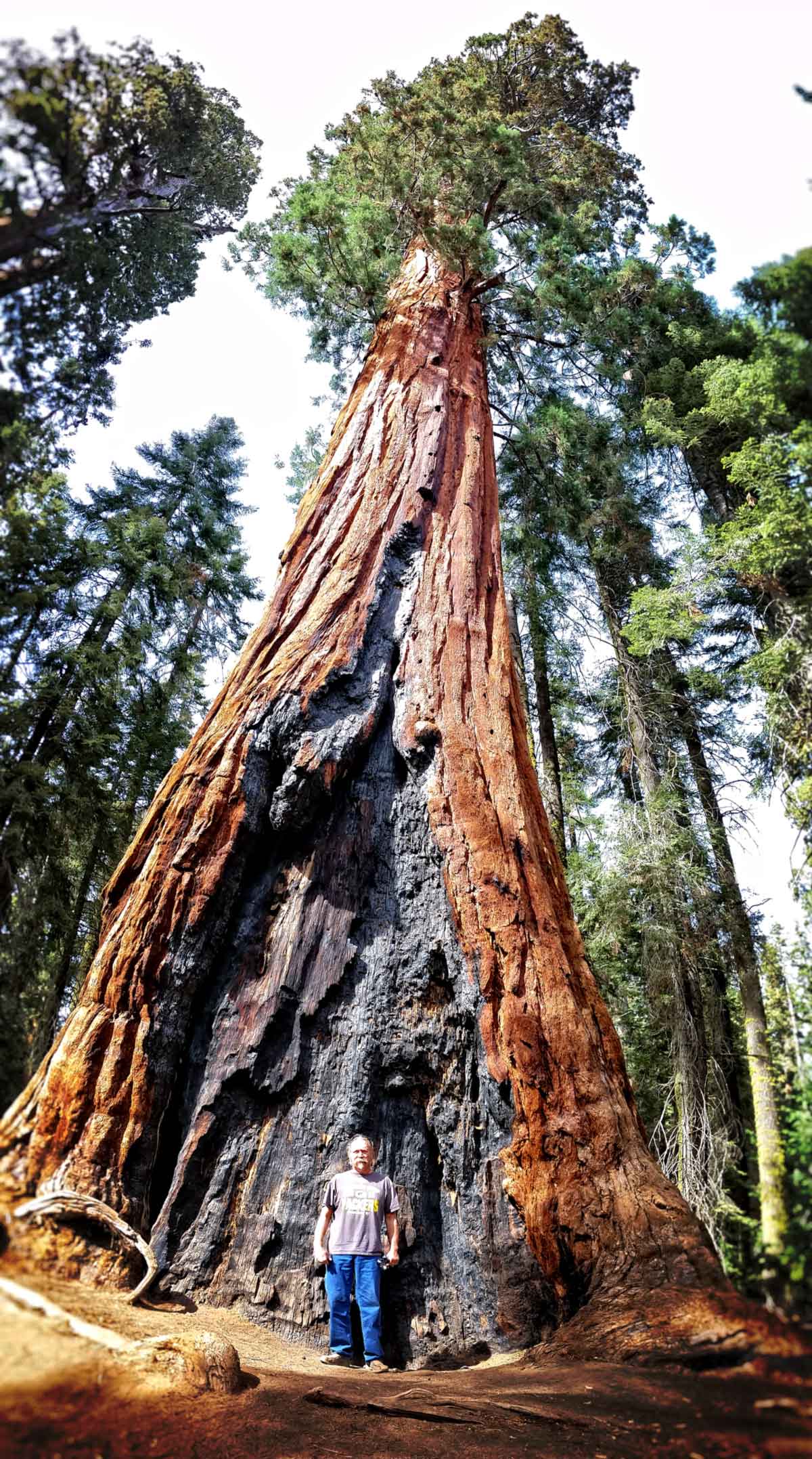 Sequoias have bark up to 2' thick which helps them survive forest fires.

As I was engrossed in filming I started to hear a new sound in the forest. Replacing dense silence I heard what sounded like a footstep cracking on forest floor debris. It did not sound large, but it was not a quick sound either. One snap, and then silence. Later another. As snaps increased in frequency time slowed. This was not someone walking on branches. This was different.

All the sudden I heard a fast cracking roar and a massive bang.

Oh dear lord this was not feet. This was a tree.

And this, “oh, that’s not feet-tree” just hit the forest floor. But it was not a tree. It was a branch. But that branch was the size of a tree and it was loud. And it scared me. And all the sudden it dawned on me that no one was there to say, “Oh be careful. If a branch falls on your head it might be a problem.” Or, “ah, you might want to be a bit more aware of your surroundings and less concerned with that camera angle.”

At that point my quiet creativity had been hijacked by something much greater than my silly little camera and me.

It was as if the forest said,

Just so you know, I am too.

And I trump anything

It’s not about you.

It’s all about me. 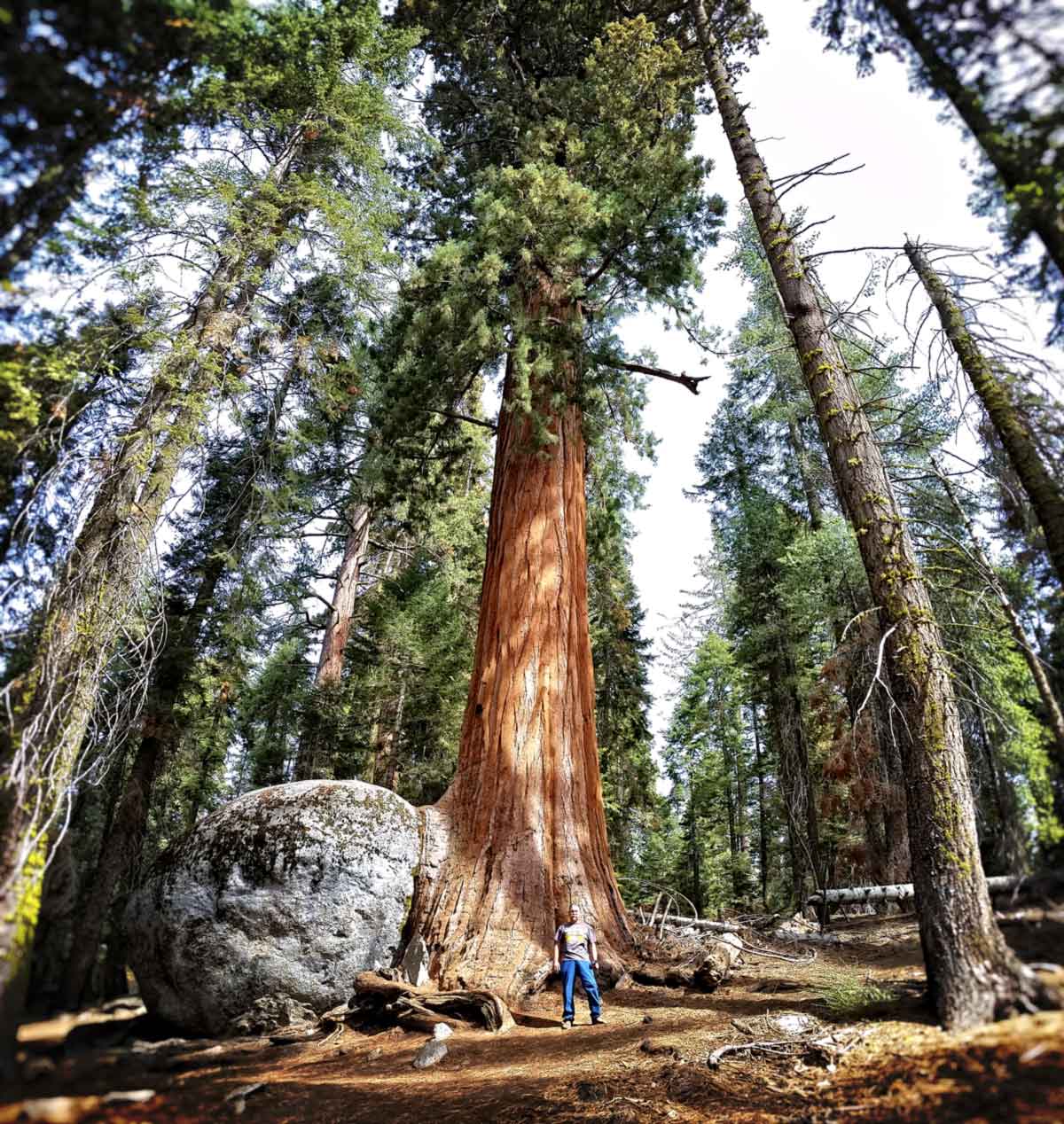 Sequoias can live over 3000 years and reach heights of over 300 feet.

Bud called out. “Did you hear that?” “Yes” I said. “Did you get it on film?” “Yes. I think so”. “Holy shit”. [We both said that. - Several times.] We quickly found each other and gathered at the base of our big tree. Like a couple of sugar-hyped kids we replayed what happened several times. It really did get our blood pumping. Eventually we settled down and headed back to the van, [door still open], to continue on. While we began to drive the next set of switchbacks I thought to myself, “I am here. Here, as in, like it was when I was a kid. And those Big Trees have just welcomed me back.”

That was our first encounter with a Big Tree or Sequoia. As the days passed we lingered in Sequoia National Park. We visited all its landmarks, hiking here and there, seeing more and more big trees and learning. Its rare qualities filled us with a great memory and sense of peace. Once again, a forest worked its magic upon our souls.

For me, trees provide a pathway to personal peace. And forests magnify that magic like no other. Like trees creating a forest, so too can inner peace spread. And in its path creates a vast forest of peace and compassion. And perhaps even, if we’re lucky, and believe, peace on earth.